Just added to your cart

The Suzuki Carry is a staple in the world of kei class mini trucks. It has been serving as a workhorse for Japanese farmers and businesses for decades. We ship new and used Suzuki Carry models worldwide, directly from Japan.

The Suzuki Carry truck and Every Van have had various updates and redesigns since debuting in the early 60’s. Click on each generation listed blow to see more details.

Officially called the Suzulight Carry, this first generation truck was the beginning of a long line of best-selling mini trucks under the Carry and eventually Every nameplate. The first truck was organized in a “midship” layout, with the engine sitting under the driver’s seats near the middle of the car. Although it was essentially a cabover truck, it did have a small hood to resemble front-engined trucks. The Suzulight Carry was offered with a two cylinder two-stroke air-cooled engine producing 21hp, which was enough to carry up to 350kg (771lbs) of cargo in the bed.

In subsequent years a Suzulight Carry Van was also released based on the Truck. This was a three-door van with seating for four people that could also carry 300kg of cargo in the back. This first van was the genesis of the Suzuki Every van that would soon follow.

From 1961 to 1965 the Suzulight Carry was manufactured under the following chassis codes and spec (trim) levels.

A minor update for the Carry Truck and Van came in 1965, with more features and updated styling. The Carry Truck now carried the chassis code/spec name “L20” with the van being called the “L20V”.

The L20 truck increased the cabin space as well as the truck bed space, allowing for more general room for passengers and cargo. Maximum load capacity and engine power stayed the same, as well as the general size of the truck.

The L20V Carry Van was largely the same under the hood and sheet metal. The van featured a split rear door, with a bottom and top hatch opening like a clamshell. Just as its predecessor, the L20V provided seating for four. It could carry up to 300kg of cargo with four passengers, and 200kg of cargo with 2 passengers.

The L20 series was very short lived, only lasting two model years and simultaneously being sold with the next generation L30 series Carry Truck and Van. 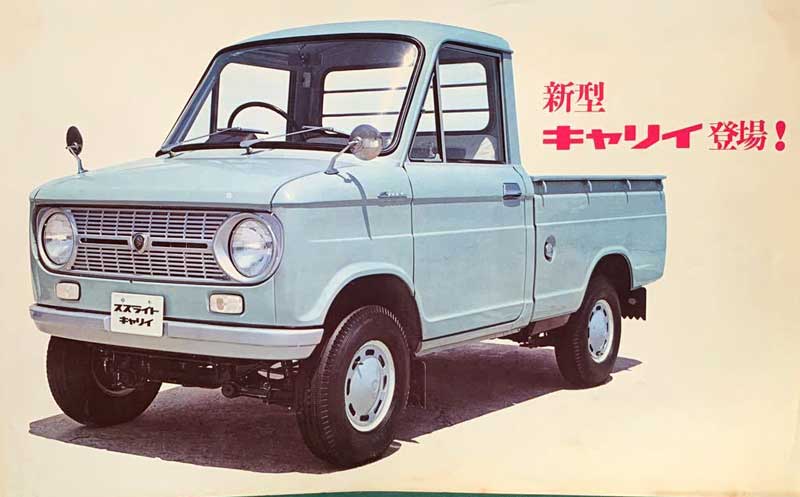 From 1965 to 1966 the Suzulight Carry was manufactured under the following chassis codes and spec (trim) levels.

For a brief period the L20 and newer L30 Carry models were sold simultaneously in the same showrooms. The newer L30 received a full redesign from front to back. The bonnet of the L20 was gone and replaced with a flat front panel that would become the norm for kei trucks for decades. The L30 was officially sold under the Suzuki brand, rather than Suzulight, starting with this generation.

Specs and dimensions were largely similar to the outgoing L20, but there were some improvements and additional features offered. Just as the previous generation, the L30H came with a frame and canopy over the truck bed for workers to get some shade while out in the field. L30H models also came fitted with bed-mounted seats that faced inward. There were no seatbelts on those seats, so it’s safe to assume they weren’t meant to carry passengers while moving too quickly.

The L31 also featured a triple tailgate bed for the first time, allowing easy access to the bed from any side. This was another feature that would later be adopted by all models in the kei truck segment. The bed was also 380mm (15 in) longer than the L20, allowing more space for that easy-load cargo.

A van variant of the L30 Carry was also available with similar form and features as the L20 van that came before it. This lived on until 1968 when the next generation Carry was released.

The L30/31 Suzuki Carry was the first model to encompass the standard looks and features that became standard across the entire kei truck segment. It’s no wonder that Suzuki decided to do a throwback style of this truck with later generations, as it was just too good of a formula to pass up. From 1966 to 1969 the Suzuki Carry was manufactured under the following chassis codes and spec (trim) levels.

The fifth generation Suzuki Carry was a mostly evolutionary update, taming down the Giugiaro design to something a bit more contemporary. Spec levels were largely similar to the previous generation, offering a truck and van with multiple variants within each range. Both models came equipped with a new water cooled 3-cylinder engine, a first for the Carry truck and van. This engine increased power and efficiency over the previous air-cooled 2-cylinder engines. Suzuki also moved the shifter from the steering column to the floor; a change that has persisted to the present day.

The Carry Van came equipped with dual sliding doors, which provided a massive boost in useability. In addition to the sliding doors, interior cargo space was increased, partially by removing the rear slanted hatch from the previous generation. Otherwise, interior features were mostly the same. Cargo weight capacity was still 350kg with two passengers in the car.

The Carry Truck also maintained most of the same features and functionality. Trucks could be fitted with a single tailgate or the more usable triple-tailgate. Additionally there were even more commercial applications such as box trucks for carrying covered cargo and refrigerated boxes for chilled and frozen cargo.

There was also an L60 and L61 export model sold, which was largely the same as the L50 and L51 models sold in Japan. Export Carrys were equipped with a 440cc 29HP engine and were made in LHD and RHD configurations.

From 1973-1974 the Suzuki Carry was the most popular truck in Japan, reporting more registrations than any other Japanese truck model at the time.

Suzuki created a short lived update on the 5th generation carry to meet new specifications for kei-class trucks in Japan. The chassis code was ST10 but it was promoted as the Carry 55. This update came with a larger 550cc 3-cylinder engine and the overall length of the truck was slightly increased. This update lasted only four months until the next generation Carry was released, based on the ST10 model that preceded it. The ST10 is one of the rarest Carry trucks to be made, and is somewhat of a collector’s item now. From 1972 to 1976 the Suzuki Carry was manufactured under the following chassis codes and spec (trim) levels.

Looking for a Suzuki Carry?

We have a wide selection of mini trucks available, and we’re constantly adding more to our inventory. Take a look through our inventory to see what we have available, or let us know if you’re looking for something specific. Have Questions About the Suzuki Carry?

Our sales and buying staff have been purchasing kei trucks for over a decade. We can answer any questions you have about the Suzuki Carry or any other mini truck models. Please feel free to contact us with any questions at all.

contact us
Use left/right arrows to navigate the slideshow or swipe left/right if using a mobile device
{formbuilder:21996}